A Japanese woman fell down from the Niagara Falls on the border of Canada and the United States and almost certainly have died. The woman climbed with a friend on the railing to get a better view of the famous Horseshoe Falls on the Canadian side. When she wanted to climb back down, she lost her balance, slipped and fell. The police believes that she drowned. 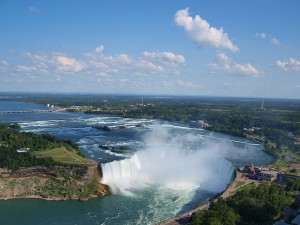 The accident happened Sunday night on the Canadian side of the more than 173 feet (53 meters) high waterfalls. The victim is a 19-year old student. Her body has not been found. The authorities consider it impossible that she survived the fall.

Both the Canadian and U.S. authorities searched her body for hours but surprisingly stumbled upon the body of an unknown man in the Niagara River. According to the police the death of the man is not related to the unfortunate death of Japanese student.

The Niagara Falls are among the largest waterfalls in the world. This natural phenomenon attracts millions of visitors.

UPDATE August 19, 2011
The body of the 19-year-old Japanese student has been found yesterday on the American side of the falls.

An employee of a tourist attraction saw a woman’s body floating in the water. The remains were taken out of the water and the identity of the victim has been confirmed.

Niagara Falls Searchers Find Unrelated Body
CBS News – Searchers were unable to find the body of a 19-year-old Japanese student who was swept over Niagara Falls and presumed drowned after falling from a railing along the Canadian side of the Niagara River, park police said Monday.
Read full article (opens in new screen)

Woman Swept Over Niagara Falls, Presumed Drowned
Huff Porst – Authorities say a woman is presumed to have drowned after being swept over Niagara Falls when she fell from a railing along the Canadian side of the Niagara River. Niagara Parks Police in Ontario say two female
Read full article (opens in new screen)


The Niagara Falls is one of the largest and most famous waterfall in the world. The waterfall consists of three parts: The Horseshoe Falls American Falls Bridal Veil Falls The […]